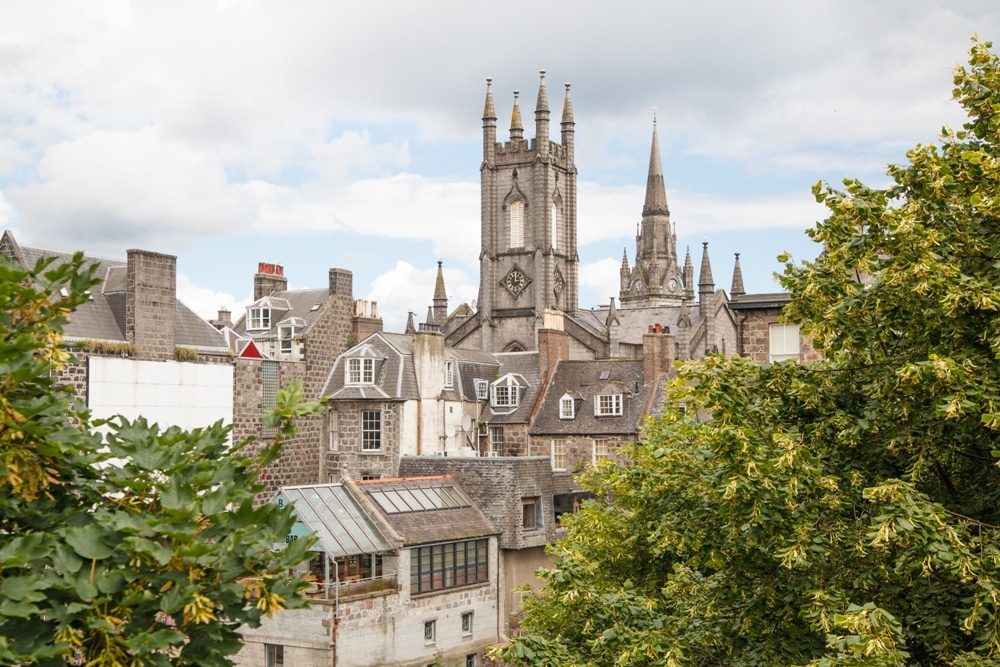 The Scottish Port City of Aberdeen – On Scotland’s northeast coast lies the port city of Aberdeen. From the port looking east, the sheer vastness of the sea opens up before you. The city’s south is bordered by Royal Deeside and, to the west, Cairngorms National Park awaits. In Aberdeen, you’re never very far from whatever it is you’d like to see or do; in fact, from the city’s center, you can walk to the harbor in less than five minutes. And, no luck needed, you’ll probably catch a glimpse of the dolphins who call this little harbor their home. While you’re there, if you’ve got the proper swimming attire, take a swim at the beach. There’s a boardwalk with several shops, and having an ice cream in the fresh air by the sea is refreshing. Out on the water, you’ll most likely see surfers and paddle-boarders enjoying the waters.

Aberdeen’s rich history will capture your attention no matter where you look, or listen for that matter. The locals have a rich, Doric accent indigenous to this region of Scotland, and the city’s subtly glistening grey granite buildings that line the streets give a historical look of uniformity.

In fact, it is these buildings, and Aberdeen’s many monuments, that make this city famous. Sparkling in the sunlight, His Majesty’s Theater and the Marischal College buildings are architecturally impressive delights.

On the north side of this port city, cobblestoned streets pave the way to Old Aberdeen, where many of the buildings have historical significance to the region. The University of Aberdeen’s buildings are still in use today as one of the top sought-after educational institutions in the United Kingdom.

To the east, the port side of this port city, the fishing quarter of the harbor is known as Footdee. Thanks to the local Doric accent, you’ll hear this pronounced as “fittie.” The quaint, charming brown and white cottages that line the streets along the water have beautifully colorful gardens adding to their charm.

In addition to the architecture and other sights, there are several attractions in Aberdeen to fill your time also. Take time to appreciate the maritime history of Aberdeen at the Aberdeen Maritime Museum, or relax amidst exotic fauna and serene ponds at Duthie Park.