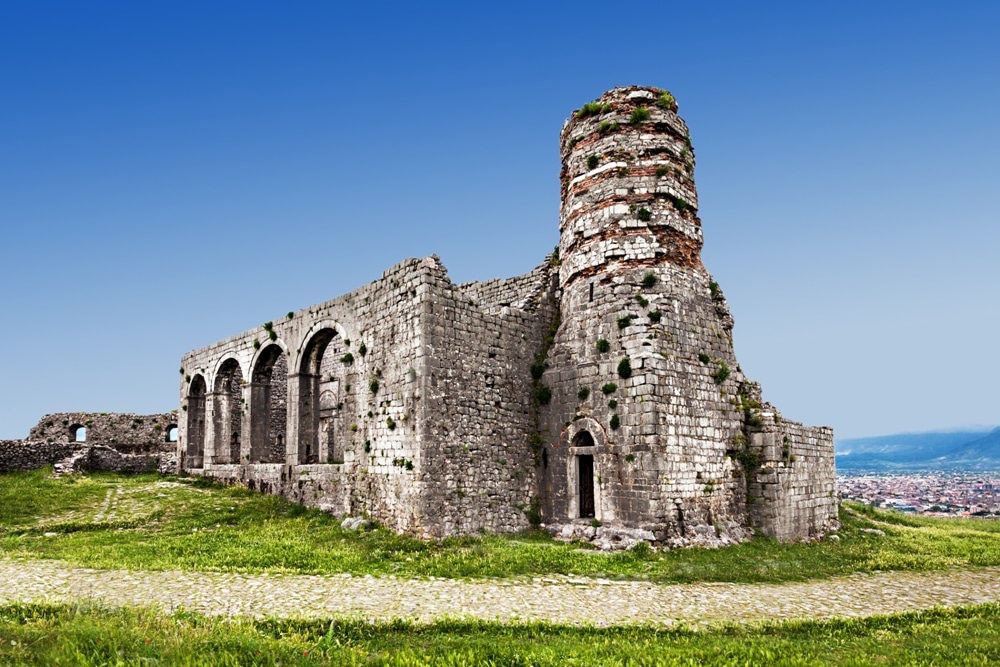 The Legend of Rozafa Castle in Shkodra, Albania – On a mountain cliff to Shkodra’s west is a castle surrounded on all sides by the confluence of three rivers – Rozafa Castle. This castle is Shkodra’s most major tourist attraction and one of the most important castles of Albania. Dating back to the times of the Illyrian tribes, the castle is known to be one of the strongholds of one of the strongest tribes. During the Roman wars, Queen Teuta used Rozafa as her military’s base.

Balkan peoples of the Middle Ages have many legends, one of which is that of kept promises, from which Rozafa gets its name. According to one specific legend concerning the castle’s name, Rozafa was the wife of the youngest brother of three. These three brothers were building the castle by day. Each following day, they would find their beloved castle-to-be had collapsed overnight. As a testament to their strenuous and important work, Rozafa sacrificed herself to allow the brothers to bury her alive within a wall of the castle with the idea that it would keep at bay whatever forces were demolishing the castle.

She and her husband had a newborn baby. When they buried her in the foundation wall, according to the legend they left one of her breasts outside of the wall so that she could continue to feed their baby. Visitors and locals believe that the water leak at the entrance to the castle is Rozafa’s breastmilk still flowing for her baby.

The shape of the castle you see today assumed its form during Balshac rule in the 1300s. Many of the remaining walls came during Venetian times, but it is also possible to see the Ottoman influence from the 1500s and 1600s. The walls measure over 2600 feet long and encapsulate more than 30 acres.

The people of Rozafa fought long and hard to protect their castle but eventually fell to the Ottomans in the late 15th century. Within the castle walls you’ll find 1400s’ water tanks as well as a chapel from the 1200s. The Rozafa Castle Museum houses various items from the different peoples who have called Rozafa home.